When I last logged out of Everquest, my first MMO, I decided to take my first character back to the spot where he'd first zoned in.  But they had done a game revamp, and instead of a bright, colorful place with people zooming back and forth and an Ogre vendor (in the human starting zone of Freeport selling pickeled wolf, pickled scorpion, and pickled...halfling?) it was this grim fortress of black towers with no one around.  (Still had level 1 snakes outside the gates, though.)  I'd heard about the burning of Teldrassil, so a couple of weeks ago spent a little time getting some screenshots of where I'd started with Honesty.  (I didn't know there would be a bronze dragon to return you back in time.) 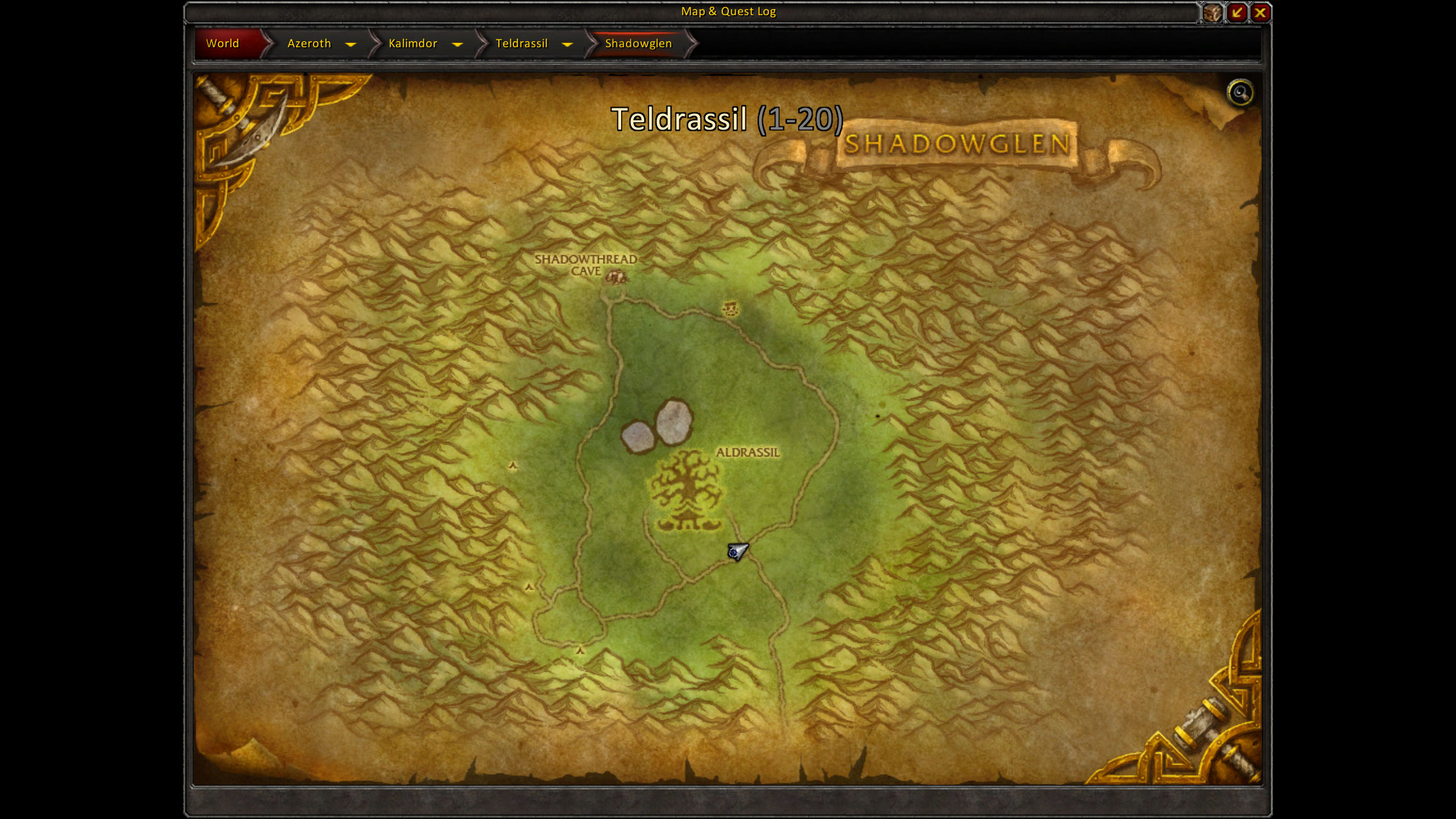 You begin in shadowglen, and while my memory is a bit fuzzy I think this is where you start: 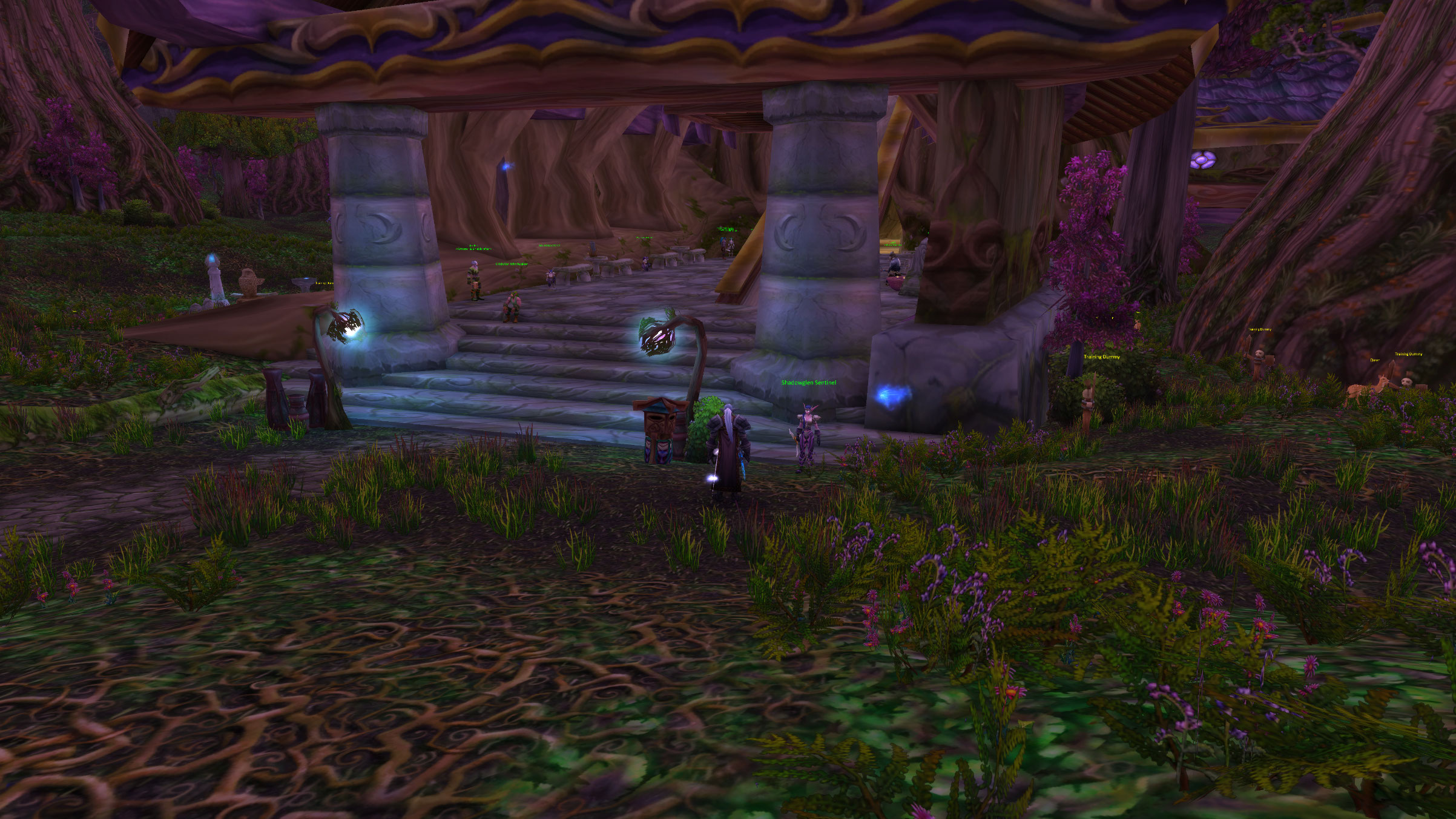 Fitting that it's in front of a mailbox, harkening back to Adventure.  )  Inside the building is the first trainer 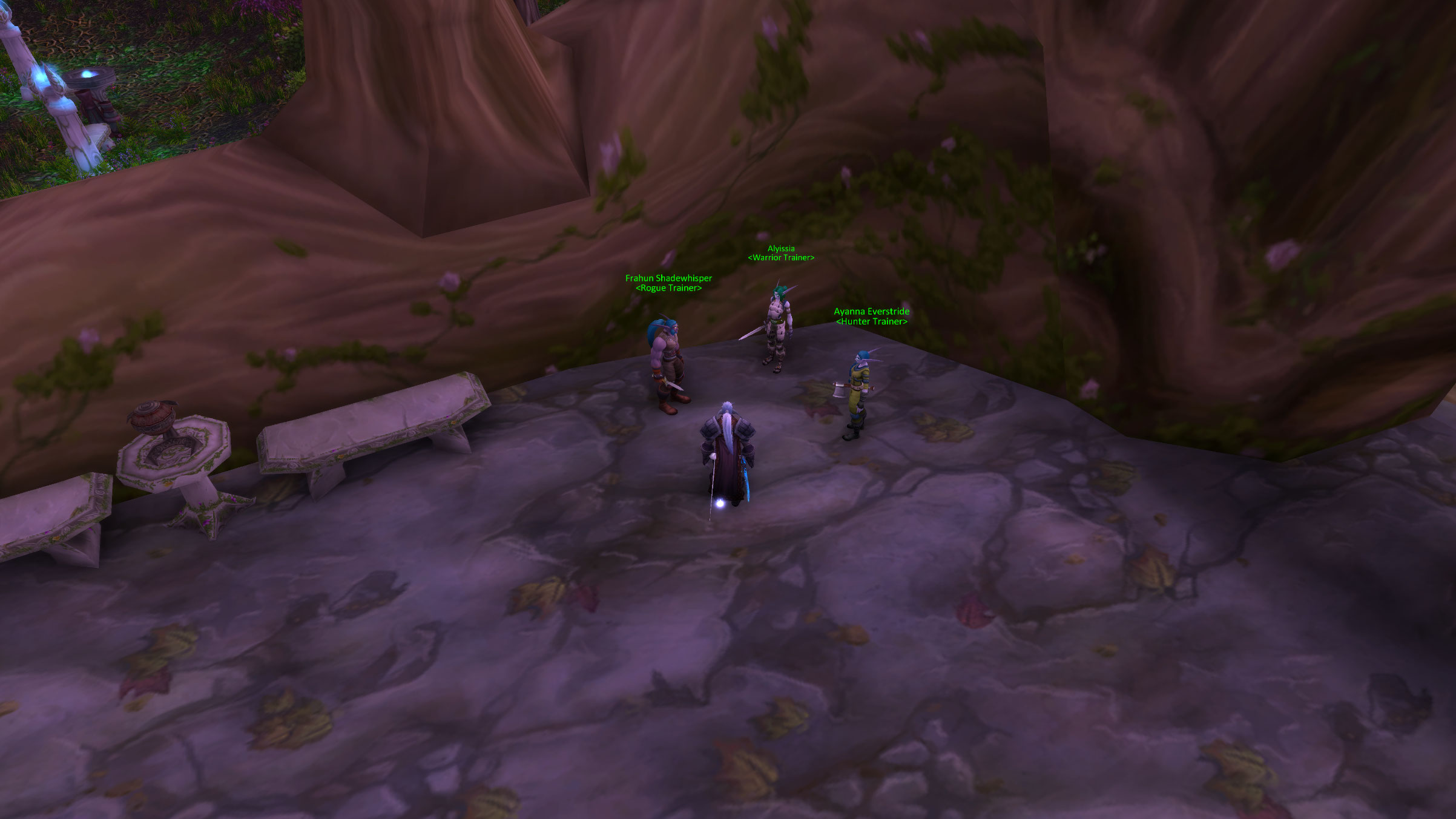 who, fortunately, escaped the burning and can be currently found in the underbelly of Dalaran.  And look!

the first red name thing I ever killed.  )  (I think there were a few boars that served as sword practice).   I took some pictures of the cave there, and some more flying along the lush and green and beautiful treetops (not that I'm bitter or anything), but no sense making this too long.

Eventually you leave the starting area, quest a bit in some surrounding areas, and run into this guy: 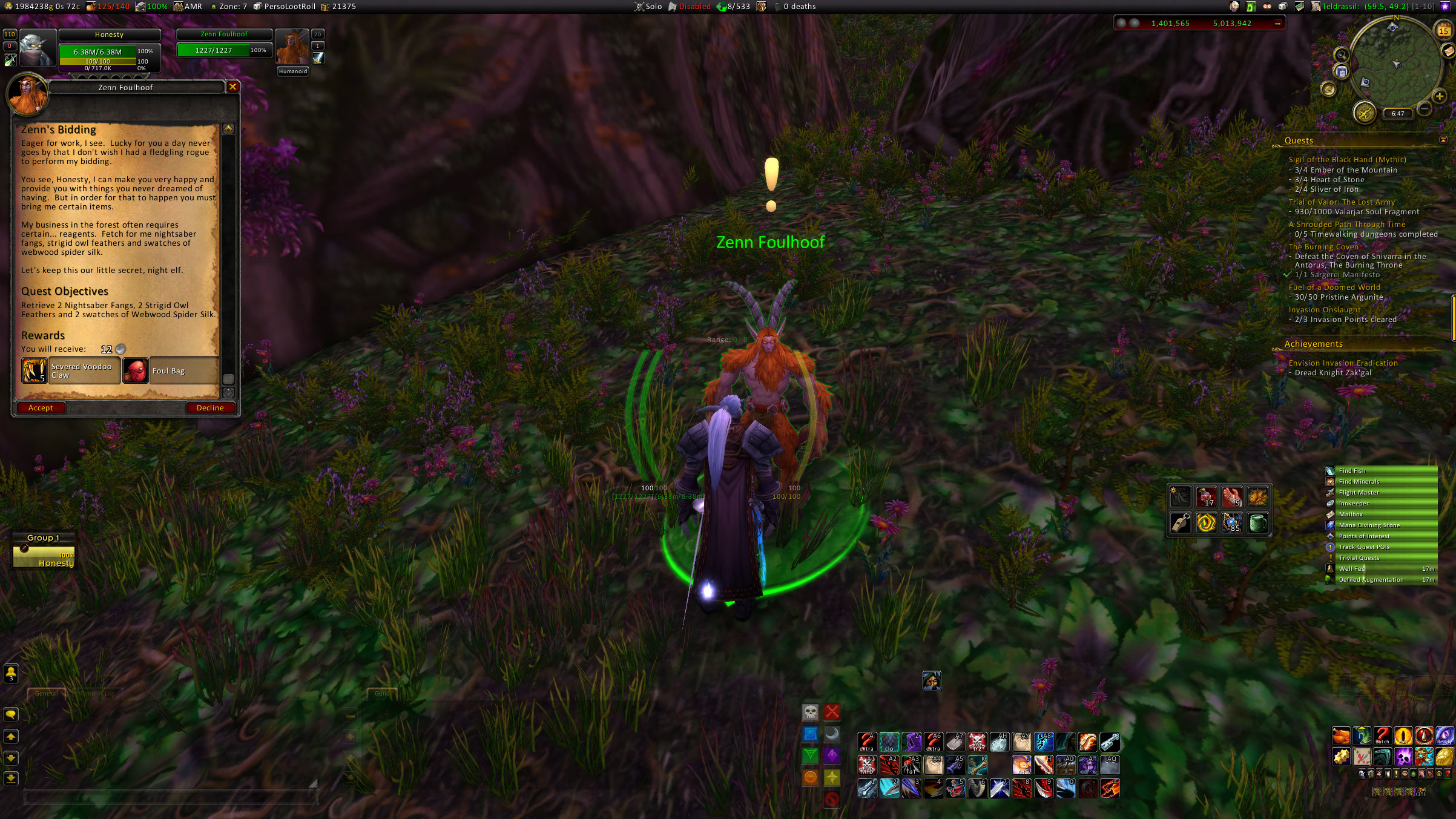 Oh cool, another quest, and it rewards a bag, which is really handy as a first character.  I hadn't played the warcraft RTS games, I didn't know the satyrs were the enemy of the night elves...so when I turned it in I was shocked to lose reputation with Darnassus.  Worried me no end about heading into town.  I seem to have recovered it by now.

One picture sums up most of my memories of Darnassus: 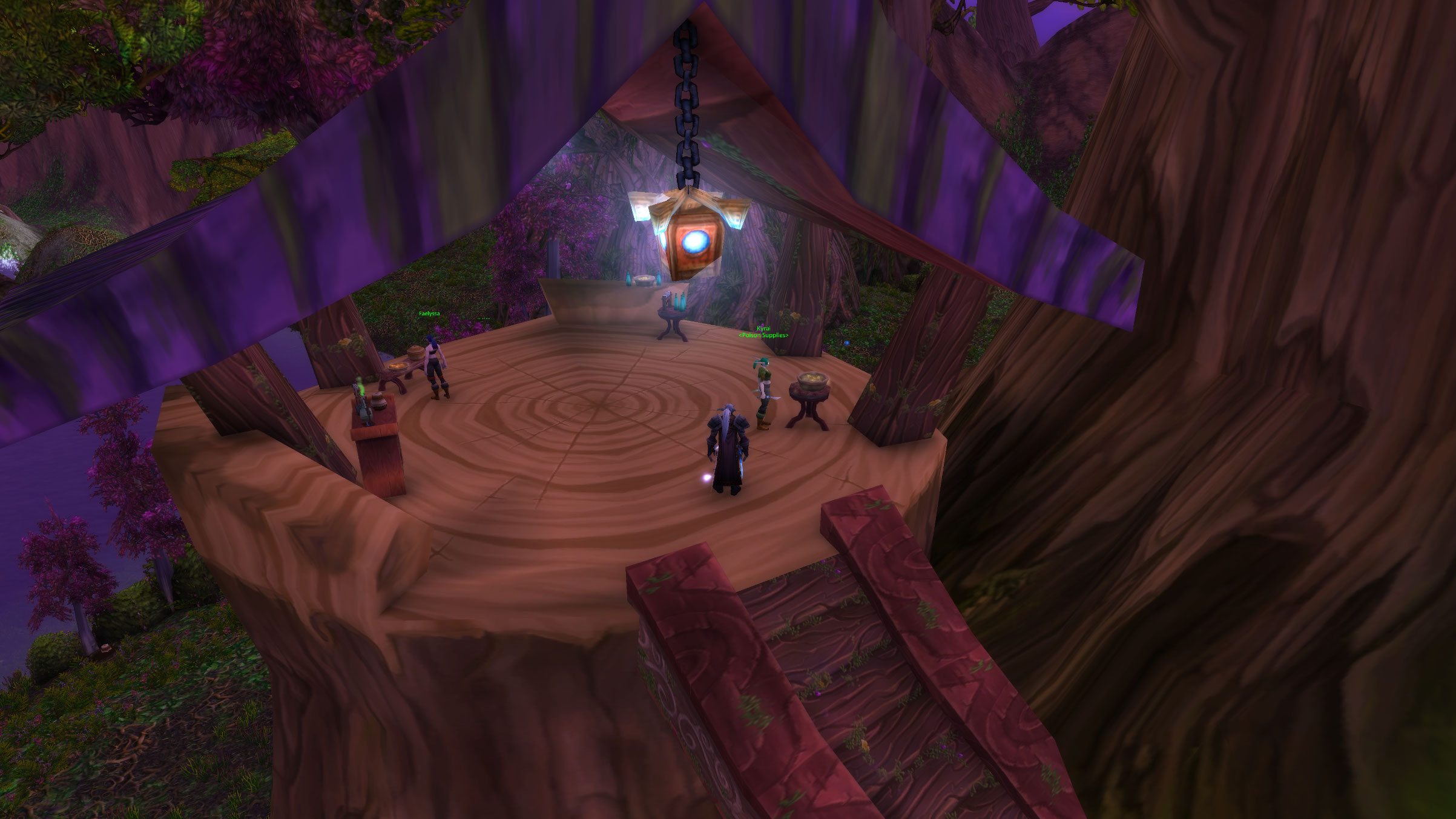 Rogues had to buy the ingredients to make poisons for their weapons, which had to be reapplied every hour or, depending on the bugs, every time you changed zone.  Every trip to Darnassus included a visit here.

I miss the tree. 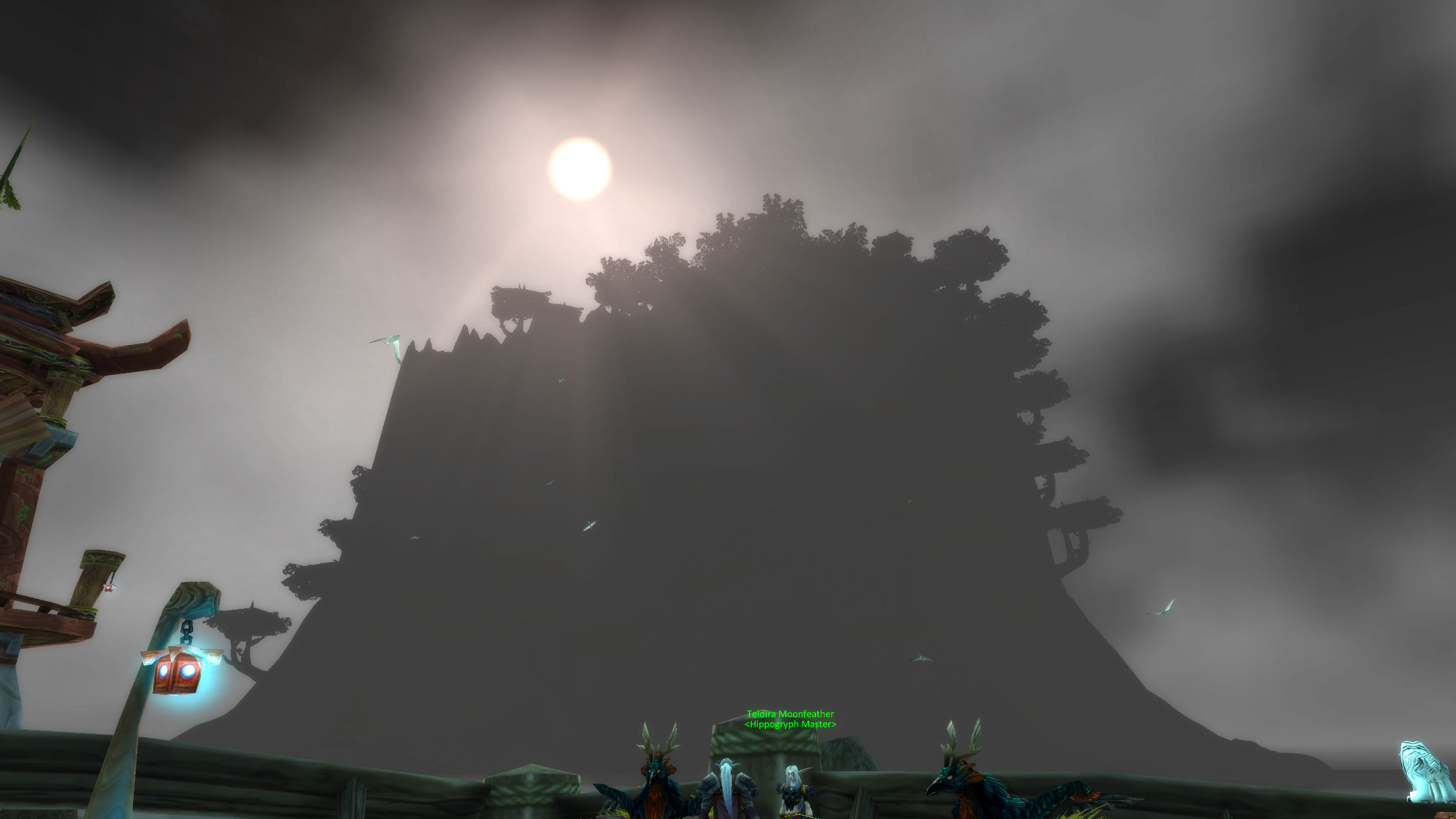 Have to keep playing the game, I guess, I don't have a place to log out any more.  )

I don't miss having to buy reagents all the time (mage teleport and portal stones, paladin blessing items, etc...)

I actually do kinda miss the reagents for the mage portals. Silly, I know.

There are currently 0 users online.

In order to support Trivial, and all the things we do as a guild, some people have been kind enough to donate funds for some of the out-of-game services we use.

If you would like to help those people out by throwing a few dollars their way, or would like to know more about this, visit this page.